🎵 WHAT TO WATCH NEXT:

This song was recorded and then filmed in my home studio. All the recording, mixing, mastering, filming, editing and uploading I do by myself in my little home studio.

"Love Song" is a power ballad written by Frank Hannon and Jeff Keith of the rock band Tesla, originally released on their 1989 album The Great Radio Controversy. The song reached number 10 on the Billboard Hot 100. It also became a gold record. On July 7, 1989, the music video was filmed during a concert in the band's home town of Sacramento at the former Cal Expo amphitheater. KRXQ (93 Rock), a local rock radio station at the time, was aware that the music video was to be filmed at the concert. The station held a contest awarding backstage passes to the fan who created the best banner that displayed "93 Rock", "Tesla", and "Love Song". Banners can be seen being held up in the audience and background throughout the video.

3:58
The most beautiful song you never heard • My Tribute to Gary Brooker
Christian Kumhofer
875 Aufrufe 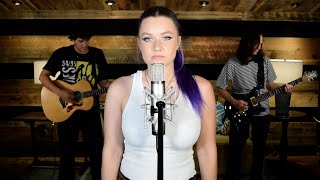